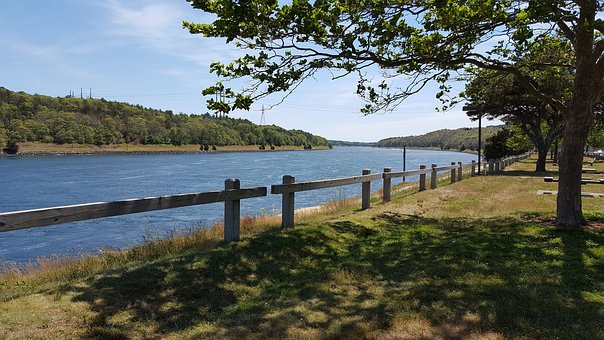 Bourne is located on both sides of the Cape Cod Canal.  Its shores touch the Cape Cod Bay to the north and Buzzards Bay, to the southwest. The eastern part of town is occupied in large part by the Joint Base Cape Cod (formerly Otis Air National Guard). Three bridges - the Sagamore, the Bourne,  and Cape Cod Canal Railroad - distinguish the town of Bourne, Cape Cod's "First City".

Settled in 1640, the town of Bourne has a rich history. Pilgrims settled here as early as 1627. It is home to the nation’s first store, Aptucxet Trading Post, where native Americans and settlers traded goods. Formerly part of the town of Sandwich, it separated in 1884. Its ten village are: Bourne Village, Bournedale, Buzzards Bay, Cataumet, Gray Gables, Monument Beach, Otis Air Base, Pocasset, Sagamore, and Sagamore Beach.

Each of these historic villages has its own interesting past. Sagamore was where a major freight car company once had its factory. President Grover Cleveland, who loved the great fishing here, frequented Gray Gables. Monument Beach has one of five town beaches, and offers scenic views of Buzzards Bay, plus full facilities, parking, and boat launch ramp. Numerous quiet harbors and inlets are enjoyed for boating, fishing, beach combing, and photography. Some town beaches have lifeguards and offer swim lessons.

The Cape Cod Canal has 14 miles of paved pathways on both sides of the canal. Dog walkers, runners, bikers, and skaters all enjoy the views and fun of watching the train bridge rising to allow huge ships to pass under. The John Gallo Ice Arena is open to the public from September to March and on a limited basis during summer.
Bourne Scenic Park beneath the Bourne Bridge is very popular in summer, offering extensive camping facilities, picnicking, playground and in-ground pool.